On 22 July 2010 the press conference of the 25th International Critics' Week, which is to take place between 1 and 11 September 2010 in the context of the 67th Venice Film Festival, was organised in Rome. Seven films selected out of more than two hundred film debuts from the whole world were announced. The selection also includes the film Dad, the first live action film by the Slovenian director Vlado Škafar after his documentary Peterka: the Year of Decision (2003) and his film essay Letter to a Child (2008).

This Slovenian film was presented by the selectors of the 25th International Critics' Week with the following words:
"The greatest strength of the film by the director Vlado Škafar is the slow pace of the contemplation and the poetic confrontation of the generations, represented by the absent father and his young son.
A very small film, whose length hardly exceeds sixty minutes, with meaningful imagery, natural and emotional dialogues, and a few moments that present the shamelessness of reality as a fascination with the setup of the scenes and the effort invested in the work with the actors."
Apart from the Slovenian film, six world premieres from the whole world were also selected: Angèle and Tony, directed by Alix Delaporte (France); Are You Afraid of the Dark by Massimo Coppola (Italy); Naomi by Eitan Zur (Israel France); Mother Earth by Syllas Tzumerkas (Greece); Martha by Marcelino Islas Hernández (Mexico); and Beyond by Pernilla August (Sweden).
All seven films are to compete for the Award for Best First Film of the Venice Film Festival in the amount of USD 100 000 and the award for film excellence in the amount of EUR 5000, given by the Veneto region.
Apart from the screenings of the films in the competition, two special events were also organised: the competition will be opened by the 1987 film Italian Night by the director Carlo Mazzacurati and concluded by the 2010 film Limbunan by the director Gutierrez Mangansakan II from the Philippines.
The film Dad was produced by Gustav film, starring Milivoj Roš and Sandi Šalamon. The workers from the Mura factory also appear in the film.
Director of photography: Marko Brdar; sound designer: Julij Zornik; produced by Frenk Celarc; co produced by Milivoj Roš, Petra Vidmar, Marjan Jelnikar, Diego Zanco, Peter Gregorčič, Dobrovnik municipality. The film was financially supported by the Slovenian Film Fund - a public fund.
The author's statement about the film:

"Film of love. After a long time father and son spend a day together. (One day is like a crystal, one's whole life reflects in it.) On a beautiful autumn Sunday, in the middle of majestic nature, the two human beings look like they are alone in the world. They have to start from the beginning. Slowly, they start touching each other with their words, voices from the past come to life, feelings are awaking, forgotten, unknown.
Monday is another day." 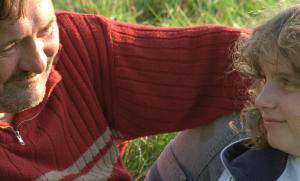