Two International Achievements of the Slovenian Film Letter to a Child

The Slovenian film Letter to a Child by Vlado Škafar, produced by Gustav Film, had its international premiere at the 38th International Film Festival in Rotterdam. It has qualified for the Bright Future section, where the festival presents "the most important, idiosyncratic and adventurous new work by novice filmmakers from all over the world".

The Rotterdam Film Festival comes immediately after the great three (Berlin - Cannes - Venice) in terms of its importance and tradition, and together with the American Sundance it is opening the new film year. The film Letter to a Child will be presented at as many as five screenings, and its international premiere will take place on 23 January. The selector Gertjan Zuilhof wrote the following about it in the festival catalogue: "A melancholic journey towards the essence of life in a sincere praise of love."
Before his international premiere, Vlado Škafar stated: "Rotterdam is actually the biggest harbour - or a door - into the world for such a film, which is neither a classic documentary nor a live action film. What I like about this festival is that the whole world of film gathers here on equal terms, and that it focuses on art, not on the market. We will try to take this opportunity and pave the road into the world for this film."
Another international acknowledgement, which came a few days ago from the United States, will certainly contribute to this end. In the January issue in the column Terra Incognita a renowned American film magazine Film Comment, published by the Film Society of Lincoln Center from New York, included Letter to a Child among 23 films which should not be overlooked in the coming year. It placed it in a prestigious company of authors like Jean-Luc Godard, Wang Bing, Philippe Grandrieux, Hayao Miyazaki, Johnnie To, Roy Andersson and so on. This is an extraordinary recognition by one of the most influential film media, which wrote at this opportunity that Škafar's film is a "monument to the imaginable lost innocence".
In Slovenia, Letter to a Child starts showing in April. 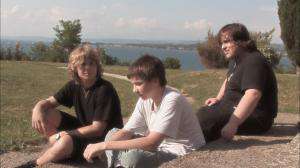