In cooperation with the Slovenian Tourist Board and the Ministry of Culture, today, on 22 May, the Slovenian Film Centre presented the measure introducing the right to cash rebate to the global film community at the European Film Market in Cannes.

Today is a festive and historical day for the Slovenian Film Centre, a public agency of the Republic of Slovenia, as well as for the promotion of Slovenia as a potential filming location for foreign producers. The right to cash rebate is available to international filmmakers and investors, and it also represents an important part of the comprehensive development of the film and audiovisual sector in the Republic of Slovenia. The right to cash rebate has already been successfully implemented by quite a few countries, and Slovenia has now joined the list of these European states. The cash rebate measure will undoubtedly ensure positive economic, financial and promotional results, influence the development of the service sector and related professions, and contribute to new jobs in the film industry. Last but not least, the measure will contribute to the visibility of Slovenia as a tourist destination. Precisely for this reason, the Slovenian Film Centre has, already a while ago, strengthened its partnership and relations with the Slovenian Tourist Board.

The exclusive Slovenian film "brunch" in Cannes was attended by hundred invited guests from all over the world as well as from the entire film industry: producers, renowned film festival directors, film critics, selectors, and directors. As Nataša Bučar, Director of the Slovenian Film Centre, a public agency of the Republic of Slovenia, stated in the introduction, "Slovenia has a rich film history, but the cash rebate measure will contribute to its international recognisability even further. To date the focus has been on minority co-productions. However, in the future even more fascinating and fruitful international film collaborations will be made possible, as Slovenia is able to provide the international film producers with all the required professional support as well as with filmmakers who understand the art of film and film production." Bučar was also enthusiastic about the fact that the cash rebate measure could be presented to the global public precisely at the 70th edition of the Cannes festival.

The press conference was also attended by the Slovenian ambassador to the Republic of France, Andrej Slapničar, who greeted everyone with a short speech.

Then the attendees were addressed by Irena Ostrouška, a representative of the Ministry of Culture of the Republic of Slovenia, who once again underlined that "as of the year 2017, Slovenia has introduced a cash rebate in the amount of 25 % of applicable expenses, used directly for the production of films or audiovisual works in the territory of the Republic of Slovenia. The goal of the cash rebate measure is to encourage foreign producers to shoot and post-produce their works in Slovenia, ensure a greater competitiveness of services, and provide the best possible opportunities to include the Slovenian natural and cultural sites in the creation of European and global productions."

For the world of film, Slovenia undoubtedly represents one of the most attractive European locations: thanks to its natural wonders, pristine environment, appealing locations and hospitality it is definitely one of the countries where film stories write themselves. In the words of Metka Pirc, Deputy Head for Fairs and Exhibitions at the Slovenian Tourist Board: "Conveniently located in the heart of Europe, with the natural diversity consisting of four major geographic regions and attractive cityscapes wrapped up in a rather small area, Slovenia has a great potential to become one of the world's top filming hubs. The recently introduced cash rebate for foreign film productions will definitely have a positive impact on the interest of the international film industry." 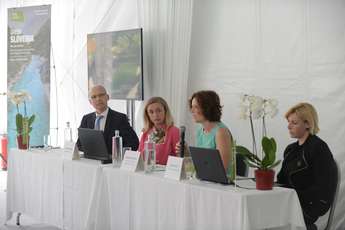 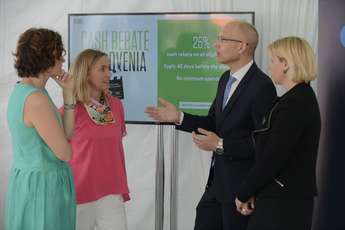 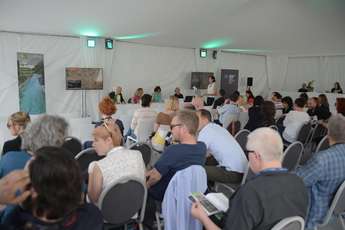