In cooperation with the Slovenian Tourist Board and the Ministry of Culture, the Slovenian Film Centre will present the measure introducing the right to cash rebate to the global film community at the European Film Market in Cannes, on 22 May at 11:00.

The main goal of the Slovenian Film Centre, a public agency of the Republic of Slovenia, is to encourage the creativity in the national film and audiovisual field. One of its tasks is also to promote Slovenia as a fascinating filming location. In order to facilitate the realisation of both of these goals, in October 2016 the Government of the Republic of Slovenia adopted a measure enabling the foreign audiovisual producers to exercise the right to cash rebate. This is an important milestone in the development of the Slovenian film industry, allowing for closer cooperation between audiovisual creativity and economy as well as focusing on the European financial perspectives and the new model of economy.

In accordance with this measure, in March 2017 the Slovenian Film Centre published a Public Call for the encouragement of audiovisual production investment on its website. The approximate amount of available resources, intended for cash rebates, is EUR 1,000,000. The absorption of funds will become possible in 2018. The cash rebate amounts up to 25 % of the total acknowledged expenses for the realisation of the (post)production of an individual project, spent in the territory of the Republic of Slovenia. The Public Call will remain open until the funds are exhausted or until 15 September 2017, and the applicants shall submit their applications at least 45 days before they start shooting (or producing, in case of animated films) in the Republic of Slovenia.

The right to cash rebate constitutes an important element of the comprehensive development of film and audiovisual industry. It is already being made use of by a significant number of states, including Slovenia's neighbouring country of Croatia. In the long term the measure should ensure many positive economic, financial and promotional effects, influence the development of the service sector and related professions, contribute to the creation of new film industry jobs, as well as, last but not least, strengthen the visibility of Slovenia as a tourist destination.

Slovenia is one of the most attractive locations in Europe in terms of its natural beauties, cultural amenities, as well as geographical position. We are able to provide the logistical and technical support for international film producers as well as offer a wide range of filmmakers, film experts, artisans and assistants, experienced in film arts and film production, mobile, and used to international cooperation. All of this has already been recognised by the Slovenian Film Centre a while ago. In order to provide assistance to international film productions, it has already started carrying out the tasks of the film commission, while at the same time it has strengthened its cooperation with the Slovenian Tourist Board.

We are convinced that the implementation of the right to cash rebate will strengthen the competitiveness of the Slovenian film industry and promote Slovenia as an attractive location for shooting and film production.

The measure enabling the foreign audiovisual producers to exercise the right to cash rebate aims to strengthen the visibility not only of the Slovenian national film production, but also of Slovenia as a country that is undoubtedly able to offer many original and specific filming locations.

What makes Slovenia one of the world's top filming hubs? Is it the location in the heart of Europe, which makes it accessible from all corners of the world? Is it its size and conveniently packed diversity of landscape? The fact that it is one of the safest countries in the world? Perhaps the professional support that we can offer your crew? Or the up to 25 % cash rebate, which has been introduced just recently?

Short distances, well-preserved natural diversity and amazing cityscapes
Some call Slovenia Europe in a nutshell, which indeed is the best sentence to describe it: diverse locations include four geographic and climate regions within a 90-minute drive. In fact, Slovenia is the only country in the European Union that combines the Alps and the Mediterranean, the Pannonian Plains and the Karst region. Diverse geographic backdrops include Alpine peaks, Mediterranean-style coastlines, meadows, hills, pine forests, lakes, rivers, beaches, castles and palaces and even caves – all within a 90-minute drive from the capital of Ljubljana. As for cityscapes, Ljubljana has some beautiful old buildings including a castle, town hall and cathedral. Other spots with remarkable architecture include the coastal towns and other medieval towns dotted around the country. No wonder that it has been awarded the Global Green Destination title and that it won the National Geographic Legacy Award for sustainable tourism destination management.

Professional support, straightforward process of gaining permissions, up to 25 % cash rebate
Aside from the breath-taking natural features and lovely cities with remarkable architecture, highly experienced professionals in various fields of film-making industry will help you with your project. Furthermore, there is no restriction with regards to the access to filming in public spaces. Permitting is a straightforward process with no extraordinary rules - it typically takes up to five working days for permits in the cities. Not to mention financial incentives for all kinds of visual productions. Just recently, the film industry public funding introduced 25 % cash rebate. In short: Slovenia provides unique filming locations and all the logistic and technical support which goes with it!

Numerous movies and commercials were shot in Slovenia
A number of movies has already been shot in Slovenia in the past. In 2007, Slovenia was selected to be one of the locations for The Chronicles of Narnia: Prince Caspian. The reason was that it resembled New Zealand, where previous Narnia movies had been shot. Also Bollywood film producers have discovered Slovenia – one of the films shot in Slovenia even featured Indian star actor Upendra, who said he felt like in heaven in Slovenia.

Apart from movies, Slovenia is also popular for shooting commercials. One of the most high-profile productions was Park Pictures' The Swan for Audi. Just recently, Chuck Norris visited Slovenia to shoot the commercial for an Italian car producer. The ad has not been launched yet, but his Instagram posts revealed he was impressed by Ljubljana, which he referred to as "a beautiful city with beautiful people". 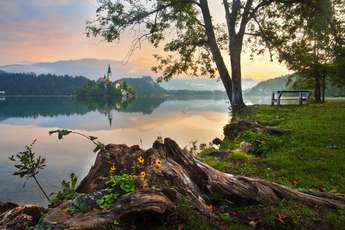