For the very first time, a new international programme titled ReActing as a Star, dedicated to encouraging the networking between the film and audiovisual actors in the region and increasing their presence in the European film industry, will take place in the framework of the second edition of the Krafft Actors Film Festival in Kranj between 16 and 19 June.

To enhance the visibility of Slovenian film and audiovisual actors and increase the opportunities for their participation in the international film industry, the Slovenian Film Centre is preparing a new professional platform titled ReActing as a Star in cooperation with the Sarajevo Film Festival, the International Casting Directors Network and the partner film centres from Croatia, Serbia, North Macedonia, and Montenegro.

On this occasion, Nataša Bučar, the director of the Slovenian Film Centre, stated the following: “Actors represent the face of any film or series, and it is a fact that actors from our region are not sufficiently recognised in Europe. The ReActing as a Star programme is intended for experienced film actors from Slovenia and the South-Eastern European film region. Thanks to the cooperation with the Sarajevo Film Festival and the partnership with the film centres from Croatia, Serbia, North Macedonia, and Montenegro, film actors from the entire region will come together in Slovenia. We hope that this will increase the circulation of actors in the region and, in the coming years, attract casting directors and agents as well as established directors and producers to Kranj, where they can meet a broad range of actors for potential roles in the future projects in one place.”

The ReActing as a Star programme aims to bring together film actors, casting directors, and agents and promote them regionally as well as internationally. The programme is envisioned as a networking event where actors can increase their competencies and expand their knowledge while simultaneously creating new business opportunities. During the three-day event, renowned actors, directors, casting directors, and agents will share their professional experience as experts and leaders of thematic workshops.

On the occasion of the programme’s first edition, Tina Hajon, the instigator and manager of the programme, said the following: “The European audiovisual production is facing a steady growth of co-productions. With the upcoming networking programme, we aim to create a platform to strengthen our connections. We believe that improving the regional and European mobility of actors between the neighbouring countries will enhance our entire audiovisual industry. At this three-day event, we will discuss the best ways and tools for the promotion of actors.”

Thus, the new event will be thematically linked to the film festival’s programme, which is dedicated to the exploration of intimate film scenes this year.

The new international programme in Kranj will also include workshops by the renowned film director Teona Mitevska, who has presented many of her films at the Berlin Film Festival, the internationally acclaimed film actors Leon Lučev and Jelena Graovac Lučev, and the French director Luc Besson’s casting director Nathalie Chéron. The masterclasses, which will also be open to the public, will be held by the renowned, multiple award-winning Croatian director Dalibor Matanić, the casting director of the film The Worst Person in the World Yngvill Kolset Haga, and the movement director and intimacy coordinator for film, TV, and theatre Ita O’Brien.

The programme will be attended by twenty renowned actors from the region. The Slovenian actors will be represented by Jure Ivanušič, who last performed in the feature films Rabid Foxes by the director Boris Jurjašević and Slovenia, Australia and Tomorrow the World by the director Marko Naberšnik (both from 2017); Maruša Majer, who was selected as one of the ten star actors at the 2016 Berlinale and won several awards for her role of Mara in the film Ivan (2017) by the director Janez Burger; and Saša Pavlin Stošić, who appeared in the features Awakenings by the director Peter Bratuša (2017) and The Curse of Valburga by Tomaž Gorkić (2019), as well as in the short films The Invisible Hand of Adam Smith by Slobodan Maksimović (2017) and Paradise by Mitja Ličen and Sonja Prosenc (2019). The most prominent agents and casting agents from the region, including a representative of the Slovenian agency Casting.si, will also attend the event.

Among the actors and actresses from the region, we would like to highlight the Croatian actress Judita Franković Brdar, who, in addition to her roles in Croatian films, also appeared in two Slovenian works: The Beat of Love, the 2015 feature by Boris Petković, and Erased, the 2018 feature by Miha Mazzini. The Kosovar actor Alban Ukaj appeared, apart from other works, in the 2008 film Le silence de Lorna by the directors Jean-Pierre Dardenne and Luc Dardenne, which won an award at the Cannes Festival, as well as in the award-winning European film Quo Vadis, Aida? (2020) by Jasmila Žbanić. The Macedonian actress Zorica Nuševa starred in Teona Mitevska’s God Exists, Her Name Is Petrunya, which premiered at the 2019 Berlinale. Later, Nuševa won nine awards for this role at various film festivals. Meanwhile, the Serbian actor Petar Benčina gave an excellent performance as the doctor of the famous Serbian singer Toma Zdravković in the film Toma (2021), directed by Dragan Bjelogrlić and Zoran Lisinac.

A special event will take place on Friday, 17 June, from 10 am to 1 pm, at the Ullrichov dvorec mansion at Gorenjska Museum. Here, the selected attending actors from the region will present their portraits to the media. The event will be moderated by the TV Slovenija journalist Mateja Valentičič.

In addition to the abovementioned renowned guests, the roundtable on Saturday, 18 June, will also be joined by Anila Gajević, a casting director from Bosnia and Herzegovina, whose agency Zona represents some of the most prominent actors and young talents from the region and beyond. As a casting agent, she also worked on the projects Mission: Impossible – Ghost Protocol, Skyfall, Game of Thrones, and many others. In 2016, Screen International listed her as one of the leading upcoming casting agents (Future Leaders: Agents). Georg Georgy comes from Germany and lives and works in Berlin. After his career as a professional classical and contemporary dancer, he started pursuing his life’s mission: to discover and collaborate with young talents. In 2020, he and Nadine Juntke founded Gretel & Hensel, a special casting agency dedicated to providing inspiration to actors in international art films and series. Timka Grin, who also comes from Bosnia and Herzegovina, has worked on more than fifty features and shorts, many of them award-winning. She has collaborated with directors such as Jean-Luc Godard, Danis Tanović, Aida Begić, Jasmila Zbanić, and Marion Haensel, among others. She also took part in the Slovenian minority co-production Morena by Antoneta Alamat Kusijanović, which won the Camera d'Or for Best First Film in Cannes last year. Tijana Popović, originally from Serbia, works in public relations, marketing, and international relations; Kirijana A. Nikolovska from Macedonia has twenty-five years of experience as a casting director and has worked on more than forty film and TV projects; while Oriana Kunčić, who comes from Croatia, has a degree in acting and has worked as a casting director since 2003. She has collaborated with many directors such as Srđan Karanović, Jasmila Žbanić, Hans Christian Smith, and Andrea Štaka, as well as worked on Jasmila Žbanić’s feature Grbavica, which won the Golden Bear at the Berlinale.

The motto of the first edition of the international ReActing as a Star programme is Play Locally, Act Internationally. 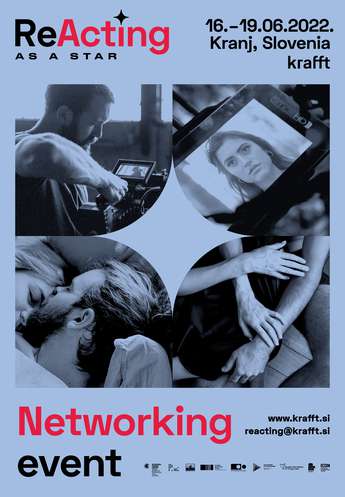