How many shorts fit into the longest night?

The third Short Film Night all around Slovenia

On Winter Solstice on 21 December, the sun will rise at 7:41 and set at 16:19. The day will only be 8 hours and 38 minutes long. On this day five years ago, France thought of the shortest film format and founded the International Short Film Day. The number of countries participating in the event is increasing steeply: this year more than fifty countries will take part in it worldwide. Slovenia joined the event in 2014. At the initiative of the Slovenian Film Centre, on 21 December the selected cinemas will be showing short films for the third time in a row.

Slovenian Cinematheque, where the central event will take place, will screen films in the following categories: classics, animated films for adults, a selection from the the 19th Festival of Slovenian Film, student films of the Academy of Theatre, Radio, Film and Television and the Academy of Arts of the University of Nova Gorica, a selection of the Postaja DIVA archive (Centre for Contemporary Arts, Ljubljana), and a selection from the Ljubljana Short Film Festival.

The celebration will also take place in nineteen Art Cinema Network venues all around Slovenia, where special attention will be paid to animated films for children. Some of the screenings will be attended by the authors of the films as well. The Slovenian national television will also take part in the event: on 21 December at 11 p.m., five short films will be broadcast on TVS 2.

Also this year, the Slovenian Film Centre invited the following institutions to participate in the preparation of the programme:the Directors Guild of Slovenia, Slovenian Animated Film Association, Kraken Film Society, Academy of Theatre, Radio, Film and Television, Academy of Arts of the University of Nova Gorica, Slovenian Film Archive of the Archives of the Republic of Slovenia, and the Centre for Contemporary Arts – Ljubljana. Viba Film Studio will contribute technical assistance.

The events are free and some of the films will also be shown on the Vimeo channel of the Slovenian Film Centre.

How many shorts do therefore fit into the longest night?

Take a look at the programme and find the answer on 21 December. 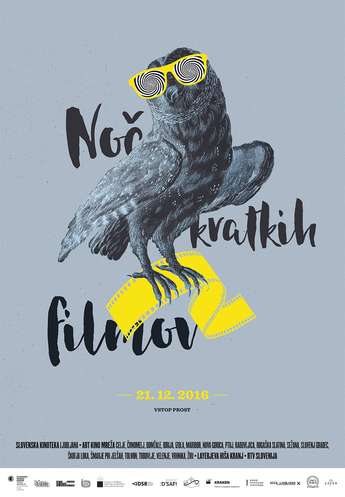