Today the 51st International Film Festival, which took place between 1 and 9 July 2016 and belongs among the most important film festivals in the world, concluded in Karlovy Vary with the official Festival Awards ceremony.

The international jury of the main competition programme awarded the Crystal Globe for Best Director to Damjan Kozole, the director of the film Night Life. Thus Kozole received one of the most important film awards or acknowledgements ever to be received by the Slovenian filmmakers.

Head here to read more about the other Festival Awards.

Night Life, the new feature by the director Damjan Kozole, was shown in the official competition programme as the world premiere. The screening which took place in the evening on 6 July in the festival's Grand Hall in front of 1200 people, was an extraordinary success. The film was presented by the director Damjan Kozole together with the film's immediate cast and creative team, including actress Pia Zemljič, actor Marko Mandič, co-writer Ognjen Sviličić, costume designer Zora Stančič, co-producer Labina Mitevska and producer Danijel Hočevar. 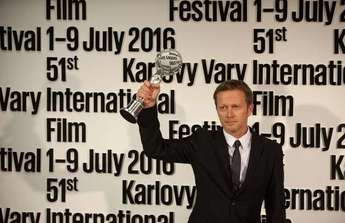