The 64th Berlin Film Festival is taking place from 6 to 16 February.

The film Chefurs Raus! by the director Goran Vojnović, produced by Arsmedia, will be shown at a market screening on Monday, 10 February. This will be its second market screening (the first one took place in 2013 in Cannes), where the film will attempt to discover more successful international festival and distribution options. The 2014 Film Guide (covering full‑length live‑action and documentary films) will be presented, while the short films are covered in the separate short film guide, already presented at the short film market in Clermont Ferrand a few days ago.

On Saturday, 8 February, all three countries are organising the joint opening reception at the HomeBase club, where apart from images from various films national wines will also be available. Slovenia will be represented by red wines from the Littoral region (Černe) and white wines from the Ljutomer area (Hlebec).

Numerous other events will accompany the Berlin festival and market. For the twelfth year the Berlinale Talent Campus will keep discovering film authors from all over the world. This year the young Slovenian producer Marina Gumzi and director of photography Darko Herič, who worked with Nejc Gazvoda on his feature Dual, have qualified for Talent Campus.

At the same time Slovenian Film Centre will provide room for all the attending Slovenian professionals to use this space for their business meetings. The SFC representatives will be present in Berlin from 6 to 13 February. 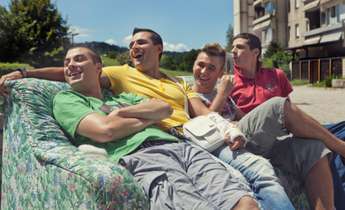