On receiving the award, the director said: “The award is a gift to all women whose voices have been unheard, rejected, and distorted throughout history. To paraphrase the actress Vicky Krieps, now is the time for women to heal all the wounds of the past, speak out, and be heard and respected in the society. Only in this way can we, together with men, build a better future for all of us.”

A total of five short films, selected from among 29 candidates, were nominated for the award.

On receiving the award, Nataša Bučar, the Director of the Slovenian Film Centre, stated: “The 2022 European Oscar is ours. We also have the extremely talented director Urška Djukić, as well as a cinematography that belongs at the very top of European film. I wish Slovenia could support talented male and female filmmakers and ensure better conditions for filmmaking in Slovenia!”

Granny’s Sexual Life takes us on a brief excursion into the history of the intimacy of an old lady from the countryside, summing up the relationship in which women in the first half of the 20th century were, in the context of strict church doctrines and general social conventions, perceived as objects for the satisfaction of their husbands’ sexual desires. The film was inspired by the women’s testimonies that Milena Miklavčič collected in her book Fire, Butts and Snakes Are Not to Be Toyed With. The screenplay was written by the director, who also edited the film, and co-written by Maria Bohr. Émilie Pigeard was the co-director and animator. The voices were recorded by Doroteja Nadrah, Jure Henigman, Mara Vilar, Božena Zabret, and Bojana Ciglič. The music was composed by Tomaž Grom. Sound design by Julij Zornik. The film is a Slovenian-French co-production, and the Slovenian producer is the production company Studio Virc, whose producer, Boštjan Virc, said the following on the occasion: “This is the first European Film Award for Slovenian filmmakers. It is a historic event, comparable to top Slovenian sports results. In our case, it also represents a reward for European cooperation, as Granny’s Sexual Life is a Slovenian-French co-production with directors Urška Djukić and Émilie Pigeard and the rest of the film crew in Slovenia and France. Due to limited domestic funding, co-production cooperation is essential for Slovenian films.”

The award follows the second nomination for Slovenian directors in independent Slovenia. Twenty years ago, Maja Weiss’s feature Guardian of the Frontier was nominated for the award in the debut film category. In 2003, the live-action short Atorsion by the Serbian director Stefan Arsenijević, produced by the Slovenian production company Studio Arkadena and supported by the then Slovenian Film Fund, was also nominated for the European Film Award in the short film category and won the Best Short Film Award.

Between 13 and 15 December, Granny’s Sexual Life will be available for viewing on the Slovenian Film Database website.

On a winter’s day in the early 20th century, in a small fishing village in north-eastern Italy, the young Agata gives birth to a stillborn daughter. According to Catholic tradition, the souls of stillborn children are condemned to wander in Limbo forever. However, people say that somewhere in the north, there is a shrine where children can be brought back to life for a single breath – just enough to baptise them and save their souls. Agata straps a box with her daughter’s small corpse on her back and sets off on a long, hopeful journey towards the miraculous place... The film’s Slovenian co-producer is Danijel Hočevar from the Vertigo production company, with Zala Opara as his assistant. On receiving the award, Hočevar stated: “The award is a remarkable way of completing the one-and-a-half-year journey of this feature film – from its world premiere in the Critics’ Week programme at the Cannes International Film Festival in July 2021 to last night’s European Film Awards in Reykjavik. The award represents an extraordinary recognition for the entire film crew, especially the director of photography Mitja Ličen and all Slovenian collaborators and technicians, the production manager Matija Kozamernik, assistant producer Zala Opara, and the entire Vertigo Ljubljana team. At the same time, the film is a proof of the successful cooperation between Slovenian producers and filmmakers and their European colleagues. It confirms the importance of international co-productions, supported by the Slovenian Film Centre and Viba Film Studio.” 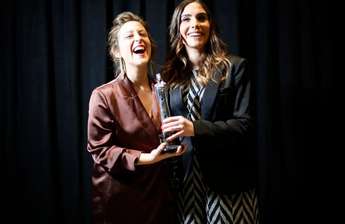 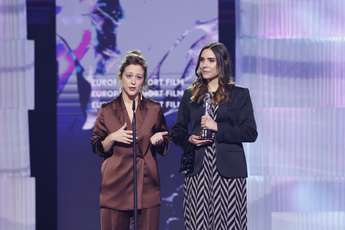 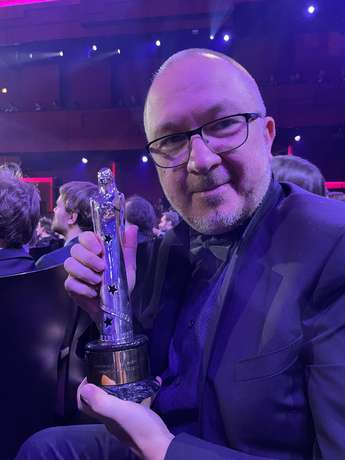 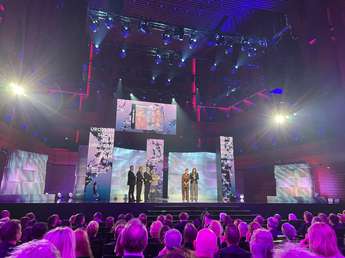 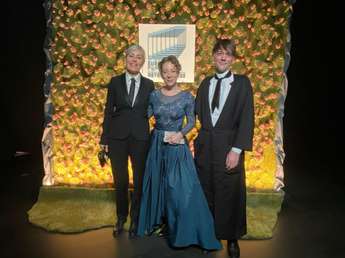