This French/Slovenian/Macedonian coproduction follows three teenagers spending their summer in the mountains, looking after sheep with the help of shepherd dogs.

Zarif (20), Zani (18) and Zekir (15) are brothers. They come up to the magnificent and peaceful Solunska Glava of North Macedonia with a thousand of sheep every year from early spring to late autumn. At 2,500 metres above the sea, in an isolated place, they live a pastoral and lonely life.

“I met Zarif and Zani four years ago. They were 14 and 11 at the time, and they had been shepherds for several years already. The first time I went up to Ubava with the boys, I didn’t expect my representations to be so unsettled. To be honest, I was shocked at first to see these young people work hard and live so far from the ‘regular’ world of European teenagers,” director and producer Petra Seliškar explains her motive for making this documentary.

The film is produced by Victor Ede through Cinephage (France) and Petra Seliškar through Petra Pan Film (Slovenia) in coproduction with Sara Ferro through PPFP (North Macedonia). The project was supported in the development phase by the Slovenian Film Centre and Creative Europa MEDIA. "We gained production support from CNC Vision du Monde and from the North Macedonia Film Agency, and additional support from the regional production and development fund Cote d'Azur, as well as Eurimages. We are still waiting for results of production support from the Slovenian Film Centre," Petra Seliškar told FNE. The shooting is taking place between July and December 2021 and the film is expected to be finished at the end of 2022 or the beginning of 2023.

Petra Seliškar, born in 1978 in Ljubljana, is a Slovenian writer and director, who founded her own production house in 2003, focusing on documentaries. With her rich experience and talent, she has flourished as a filmmaker with profound insight, sensibility, strong narrative force, and an innovative approach. Seliškar’s filmography includes documentaries This Is Where I Live (2011), Mother Europe (2013) and My World Is Upside Down (2015). In 2020 she finished her long documentary The Farewell and she is currently working on another documentary, The Body. 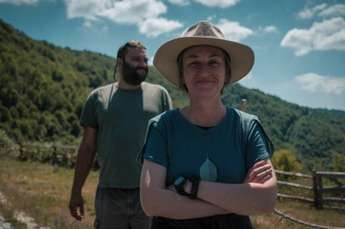