This year focus is on Slovenia.

This year, the 7th Balkan Panorama Film Festival, which is taking place between 27 September and 3 October, will focus on Slovenia. The Turkish audience will be able to see a total of twelve Slovenian films, of these six features and six shorts.

Sanremo focuses on Bruno and Duša, who live in a retirement home. They occasionally meet and spend time together, only to keep forgetting that they know each other. Nevertheless, every new encounter makes them happy. Featuring Sandi Pavlin, Silva Čušin, Mojca Funkl, Boris Cavazza, Lara Komar, Barbara Cerar, Barbara Vidovič, Safet Mujčić, Vladimir Jurc, Doroteja Nadrah, and Jurij Drevenšek. The film was produced by the Filmostovje production house.

Vesna Goodbye had its world premiere at last year’s Sarajevo Film Festival. It tells the story of the ten-year-old Nika, who must, after the death of her mother, take on the role of the adult in her fragmented family if she wants to bring her troubled sister and estranged father closer together. Starring Pauline Aleynik and Emily Milledge. At the 23rd Slovenian Film Festival, the film received the Vesna Award for the most original audio-visual work, while this year, the director received the Štiglic Gaze Award for Exceptional Direction, given annually by the Directors Guild of Slovenia. Vesna Goodbye was produced by Cvinger Film.

The documentary film Playing Men (2017) by Matjaž Ivanišin, a documentary essay about men and games, received the Vesna Award for Best Documentary at the Slovenian Film Festival in Portorož. This year, it was selected among the ten best documentaries with French distribution in the last two years. It was produced by the Nosorogi production house. The festival will also feature Ivanišin’s short documentary Che Sara (2002), which the director shot during his studies at the Academy of Theatre, Radio, Film and Television in Ljubljana. In it, we are introduced to Sara, a girl from the suburbs of Ljubljana, who is spoken to by God.

My Last Year as a Loser, the 2018 first film by the director Urša Menart, will be screened as well. When the twenty-nine-year-old art history graduate ends up on her disappointed parents’ couch without any money, work, or company, she realises that it will be harder to grow up than she has expected. Starring Eva Jesenovec, Živa Selan, Saša Pavček, Branko Završan, Špela Rozin, Jurij Drevenšek, Tina Potočnik Vrhovnik, Lara Vouk, Aljaž Jovanović, Timon Šturbej, Matic Lukšič, and Vladimir Kusić. Urša Menart’s feature debut received the Vesna Award for Best Feature Film, Best Screenplay, and Best Supporting Actress in Portorož, as well as a special jury mention at the LIFFe. It was produced by the Vertigo production house.

This film will be followed by the award-winning History of Love (2018) by the director Sonja Prosenc. It tells the story of the seventeen-year-old Iva, who faces the death of her mother. Under the impact of this profound personal loss and the discovery that she did not know everything about her mother, Iva gradually sinks into a different, almost dreamlike world, far removed from reality. Starring the Slovenian actress Dorothea Nadrah and the renowned Norwegian actor Kristoffer Joner. Also featuring Zita Fusco, Matej Zemljič, Matija Vastl, and Zoja Florjanc Lukan. This sensuous and visually rich film had its world premiere in Karlovy Vary, where it received the jury award for outstanding artistic achievements as well as a special jury mention as the Best Film. Sonja Prosenc thus became the first Slovenian female director to receive an award in the main competition programme of one of the five biggest international festivals. Last year, she was also included in the first Golden Album of the European Eurimages Fund.

The legendary digitally restored Slovenian classic Valley of Peace (1956) by France Štiglic will also be screened. The film premiered at the 1957 Cannes Film Festival, where John Kitzmiller won the Grand Prix for his performance as an American pilot and became the first black actor to win the top prize at a major film festival.

Let us proceed with the shorts. The first of these is the winning film of this year’s Clermont Ferrand Festival Sisters (2021) by Katarina Rešek – Kukla. The sisters from the title – Sina, Mihrije, and Jasna – are actually three best friends in their early twenties. The three tomboys, always wearing loose grey sweat suits and tying their hair into low ponytails stuffed in their sweaters, train martial arts and keep to themselves. Their lifestyle often brings them into conflicts with the local boys. During one of their scuffles, a fragile young girl, who is in fact only becoming that, saves them from total defeat and humiliation. Starring the actress Mia Skrbinac and debutants Sarah Al Saleh and Mina Milovanović. The film was produced by A Atalanta production company.

In the short film Bits (2020), written and directed by Áron Horváth, we follow a single day in the life of Teo and Ksaver, who are visited by their father, a truck driver, after two months. Their mother is less enthusiastic about the visit, but Teo does not want to miss a Formula 1 race. Starring the debutants Teodor Tot and Ksaver Pratnekar and the Hungarian actors Zsolt Nagy and Tamara Avguštin. The film was produced by A Atalanta as well.

A badger lies motionless on a local forest road. A police patrol approaches the body in the dark. During their examination, the police find out that the animal is not dead, as they have been led to believe, but has simply eaten too many overripe pears. When they attempt to drag the incapacitated creature off the road, the badger awakens and steers the events in an unusual direction... This is the story of Špela Čadež’s 2016 animated short film Night Bird. The script was written by Špela Čadež and Gregor Zorc, while Zarja Menart, Matej Lavrenčič, and Špela Čadež were in charge of animation. It won the Grand Prize at the 2017 festival of animated film Animafest in Zagreb. The animated film was produced by Tina Smrekar and Špela Čadež.

For quite a while, the protagonist of the following film Milan Veber, a 40-year-old art teacher, has been unemployed and, of course, also chronically broke. He lives in a cheap small studio apartment that he rents in what used to be a lively working-class district in an industrial city, feeling too young to grow old and too old to start over – until the moment when he wants to open a can of beef stew after a night of drinking. At that point, he looks through the window and sees a bull in the street. A bull who has just escaped from the slaughterhouse. The film The Bull (2019) was written and directed by Bojan Labovič. Starring Jure Ivanušič and featuring Minca Lorenci, Jurij Drevenšek, David Čeh, Mateja Pucko, Nataša Tič Ralijan, Nika Rozman, Janko Turnšek, Gorazd Marinkovič, several cows, Floki the dog, and Ferdo the bull. The film was produced by Makus Film production house.

In the observational documentary Fundaments (2018) by the director Peter Cerovšek, the story of a couple in love and the construction of a luxury hotel, as recorded by a camera placed in the young couple’s apartment, are intertwined.

All films were co-financed by the Slovenian Film Centre, which also organised the first Slovenian Focus at the 7th Balkan Panorama Film Festival. 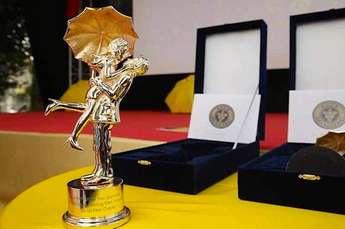