The Space Within Us is a coming-of-age drama, set in the small town of Kostanjevica na Krki. The story revolves around a 14-year-old dark-skinned boy Toby, who accompanies his mother Kristina as she returns to her home village in Slovenia.

On Monday, 15 June, the shooting of the feature The Space Within Us by the director Rahela Jagrič Pirc, who also co-wrote the script with Darja Medić, began.

The Space Within Us is a coming-of-age drama, set in the small town of Kostanjevica na Krki. The story revolves around a 14-year-old dark-skinned boy Toby, who accompanies his mother Kristina as she returns to her home village in Slovenia. Kristina, who has not visited for several years, surprises even her mother Gizela with her sudden arrival and big news about an exhibition in the local art gallery.

Toby is not excited at all to spend his summer vacation in a foreign country, away from his father and friends. He gets even more frustrated as he faces the local children’s racial prejudices for the first time. Tjaša, a tomboy whose adventurous nature attracts him, seems to be the only bright light. Their friendship leads to an unusual encounter with a retired blind astronomer Herman, who is a “village outcast”, much like Toby. Herman invites the boy to a forgotten observatory, where he shares his extensive knowledge of astronomy and teaches him about the truths of life that originate in space and affect life on Earth. The astronomical observatory also represents a shelter where Toby can hide when he finds out that his parents are experiencing serious marriage problems and that Kristina’s art exhibition has actually been pre-planned as an excuse to escape from Canada. The roller coaster of intense emotions and dynamic events makes Toby and Kristina confront their fears and the society that sees them as aliens from another planet.

The director said the following about her debut: “The Space Within Us is a coming-of-age film that introduces us to the mysterious world of space exploration, in which the protagonist realises that certain laws of the universe can also apply to our everyday lives and interpersonal relations. This realisation helps him to win over a girl, reunite his parents, and defeat a gang of village brats. I see the universe as a universal subject that has driven people towards exploration ever since the dawn of humanity, which is why I hope that everyone will be able to discover a piece of themselves in the film.”

“The story about growing up – which depicts the relations between teenagers, mother and daughter, son and father – reaches into the depths of family and human relations. For me, to deliver a coming-of-age film that is very relevant to the society and children, represents a challenge and obligation, as culture is supposed to influence as well as benefit the society,” said Boštjan Ikovic, the producer of the film.

The film is produced by Arsmedia and coproduced by MB Grip, Zvokarna, and NuFrame. It was co-financed by the Slovenian Film Centre; Technical services are offered by Viba Film Studio.

In 2008, Rahela Jagrič Pirc completed the BA (Hons) Film and Video Production course at the University of Wolverhampton (UK). Her graduation film My Two Best Friends won two prestigious “Royal Television Society” awards. She continued her studies at the Bournemouth University (MA Directing Film and Television), graduating with a short stereoscopic (s3D) film Coming Home (2009). The film is deemed as the first s3D film made by a Slovenian filmmaker. It has been shown at numerous film festivals. For this pioneering achievement, Rahela also received the title of Honorary Citizen in her home municipality of Krško (Slovenia). After completing her studies, Rahela has worked on various productions all over the world – in Europe, USA, New Zealand, Japan, and Canada. She was accepted for the Berlinale Talent Campus in 2010; selected for the Kyoto Filmmakers Lab in Japan in 2011; while in the same year, she also received a fellowship from the German filmmaking programme Nipkow. In 2013, she attended a filmmakers lab in Lithuania; while in September 2014, she was invited by the European Film Academy to attend the filmmaker’s programme Sunday in a Country. Rahela was selected for the artist residency on The Ingmar Bergman Estate on Fårö Island in Sweden in 2014, while in 2019 she was selected to attend the Reykjavik Talent Lab in Iceland. In the same year, she also started directing the TV drama Bridges of Us, broadcast by the Slovenian commercial television ProPlus – POP TV. She already collaborated with the Arsmedia production company as a director and writer with her medium-length documentary Intertwining Threads of Modern Artists (2018). 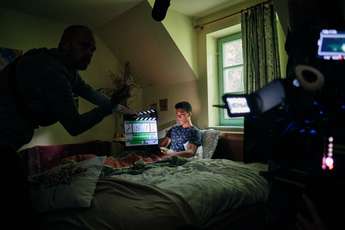 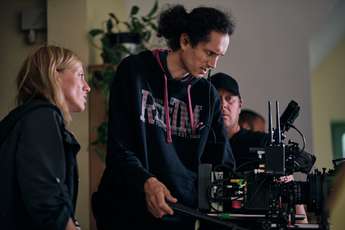