Slovenia’s second presentation at the film location market in London

One of the largest internationally renowned markets for the promotion of film locations, FOCUS 2019, is taking place on 3 and 4 December in London. This year, the Slovenian Film Centre, which carries out the activities of a Film Commission in Slovenia and thus also provides support for foreign film productions shot there, will attend this event in order to present the Slovenian film locations for the second time.

The promotion of the Slovenian film locations will once again take place in cooperation with the Slovenian Tourist Board. The purpose of this sort of promotional events is to promote Slovenia as a film destination. Because of its idyllic and picturesque appearance, Slovenia has a diverse range of film locations to offer. Meanwhile, in line with the model of the majority of the European countries, Slovenia’s 25-percent cash rebate measure for foreign productions represents a further incentive for foreign producers to shoot in the Slovenian territory. All the well-preserved historical sites, the number of scenic locations in the immediate vicinity, and the fact that it is possible to shoot in the mountains as well as by the sea in a single day belong among the key factors that qualify Slovenia as one of the most exclusive film locations. Already the following day, the crews can film in the Karst region or the Pannonian Plain. Precisely for this reason, the current slogan of the promotional campaign, which has already begun at the Cannes Film Festival, reads “Slovenia. Any European story. Within two hours. Drive less. Film more. Film in Slovenia.” The website FilminSlovenia.si has been published to provide essential information about Slovenia as a film country to Slovenian and foreign film producers.

In 2018, production houses from Italy, Philippines, Croatia, Serbia, Republic of Korea, United States of America, and Great Britain took advantage of the cash rebate measure and filmed their projects in our country. Large production companies making big, ambitious high-budget films as well as television houses that shoot TV series have been interested in filming in Slovenia. In 2018 – during the second year that foreign investments in the audiovisual production have been encouraged with the measure mentioned above – cash rebates have been approved in case of seven production companies making three features, one full-length documentary, and three TV series. This year, however, producers from Croatia, Italy, and Great Britain have shot their films in Slovenia.

As the last study of state support schemes and economic and fiscal effects of the audiovisual industry in Slovenia has shown, it is an indisputable fact that the assessed multiplier of fiscal and economic impacts amounts to 1.8, which, in practice, means that for every 100 people who are directly employed in the audiovisual sector, this industry indirectly provides for the employment of another 80 people in the Slovenian economy. Another important finding is that the fiscal impact amounts to 40 %, which means that for every 100 euros invested in the audiovisual sector, 40 euros are returned to the state budget. The overview of the key economic indicators thus clearly indicates that the audiovisual industry is not merely a cultural and artistic activity, but also an industry with numerous impacts on the economy and society.

The Slovenian Film Centre is also a member of the EUFCN - European Film Commissions Network, which aims to make use of these sorts of events to continuously encourage the long-term economic effects of international collaborations in the field of filmmaking and promotion. 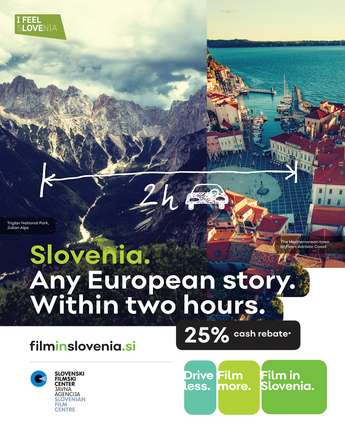