The shooting is scheduled to conclude by July 2019, while the film is to be finished by April 2020.

On Sunday, 17 May, the shooting of the feature film Riders by the director Dominik Mencej began in Gospić, Croatia. The screenplay was written by Boris Grgurović. The director's debut tells a story about two best friends, Tomaž and Anton, who are both in their mid-twenties and from the same village in the Slovenian region of Prlekija. They decide to redesign their mopeds to make them look like choppers. Ivan and Anton embark on a journey: Anton wants to impress his girlfriend who is studying in the capital and has not written to him in months, while Tomaž searches for spiritual answers to his visions, hoping that faith will guide him. Anton's plan backfires, but he does discover his true mission: to become a world traveller. Tomaž, on the other hand, becomes enlightened: for the first time in his life, he realises that God is love.

The film is produced by Miha Černec of the Staragara production company from Ljubljana and co-produced by the companies Antitalent from Croatia, Novi film from Bosnia and Herzegovina, and Sense Production from Serbia.

The shooting is scheduled to conclude by July 2019, while the film is to be finished by April 2020.

Dominik Mencej (1987) has always been passionate about film. In 2008 he shot a few shorts and was accepted to the AGRFT in Ljubljana, where he graduated in film and TV directing. Selected filmography (shorts): The Springtime Sleep (2014), Garbage Day (2011). 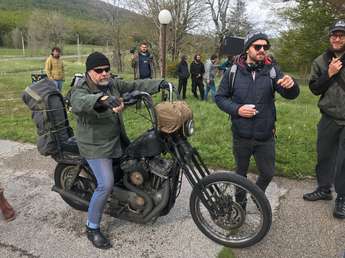