The short film marathon has already been joined by 16 states, and this year it will also take place in fifteen Slovenian cities.

21 December is the winter solstice – the shortest day and longest night of the year as well as the day when winter starts in the northern hemisphere.

With the Short Film Night the Slovenian cinematography will present and celebrate short film production. At the same time this is an opportunity for a gathering of filmmakers and fans of the shorts.

The main event will take place in the Slovenian Cinematheque as well as in 14 Art Cinema Network theatres around Slovenia. RTV Slovenia will take part in the event by broadcasting several short films during its evening programme.

The Slovenian Film Centre invited the Directors' Guild of Slovenia, Slovenian Animated Film Association, recently established Kraken Film Society, Academy of Theatre, Radio, Film and Television, and the Slovenian Film Archive at the Archives of the Republic of Slovenia to participate in the preparation of the programme. The technical assistance was provided by the Viba Film Studio.

The first celebration of the Slovenian short film represents the first Short Film Night, which will become an annual film event. 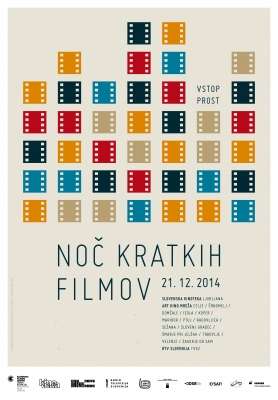