New award for the film Class Enemy and new festivals

It received a special jury mention, while the main award went to the Cannes Award‑winning film Winter Sleep by the Turkish director Nuri Bilge Ceylan.

In the context of the LUX Film Days, taking place at the international festivals around Europe and special screenings in the cinemas, on 26 October Class Enemy will be shown in the context of the Zagreb Film Festival in the Tuškanac cinema. In the beginning of November the film will also be screened at the festivals in Thessaloniki, Seville, Arras and Stockholm. At the festival in Seville, Class Enemy was already shown last year in the competition programme, while this year it will be screened in the programme of films nominated for the European Film Awards.

Two other Slovenian films will also be shown in the documentary film competition programme in the Croatian capital: Karpotrotter by the director Matjaž Ivanišin and the co‑production film Dancing with Maria by the director Ivan Gergolet. Karpotrotter (or Putnik Karpo in the Croatian language) is scheduled for Wednesday, 22 October, while Dancing with Maria will be shown on Tuesday, 21 October and Saturday, 25 October.

Today the Slovenian film The Tree by the director Sonja Prosenc was shown at the 16th Mumbai Film Festival (India). The film was selected out of fifteen debuts from all over the world, competing for the main festival award. 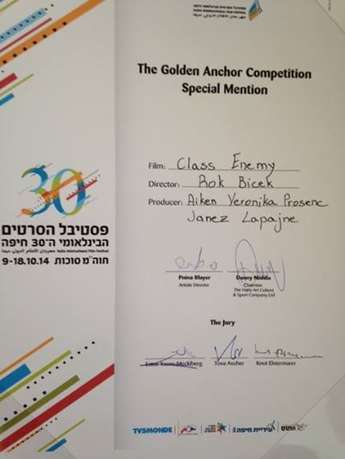