The shooting of the co production film The High Sun begins

The shooting of the Croatian – Slovenian – Serbian co production feature The High Sun (Croatian: Zvizdan) by the writer and director Dalibor Matanić has just begun on the shore of the Perućko jezero lake.

In October and November the film, focusing on three love stories, will be shot at the outskirts of Šibenik. These love stories take place in two villages in three different decades and involve forbidden love in the environment burdened by the hatred between the nations.

The film is produced by the Croatian Kinorama, Slovenian Gustav Film, and Serbian SEE Film Pro.

Starring Tihana Lazović and Goran Marković. Also featuring Nejc Cijan. Matanič entrusted the photography to Marko Brdar, who has already proved himself with the films Dad by the director Vlado Škafar and A Trip by the director Nejc Gazvoda. Makeup will also be the responsibility of a Slovenian artist, winner of this year's Vesna Award for Best Makeup Mojca Gorogranc Petrushevska, while Jure Zornik will be in charge of the sound design.

Besides the Croatian HAVC, the realisation of this film has also been supported by the Slovenian Film Centre and Viba Film Studio. 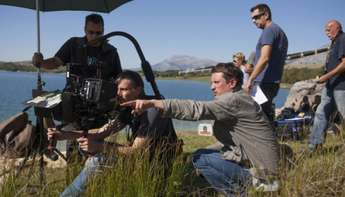