International premiere of Inferno by Vinko Möderndorfer in Busan

Inferno will have its international premiere in the official programme of the 19th Busan International Film Festival, which is to take place between 2 and 11 October. This is one of the biggest film festivals in Asia as well as one of the most important festivals in the world.

Inferno has qualified for the World Cinema programme, which represents a comprehensive overview of live‑action features from the various continents except Asia. The programme consists of the last films by the renowned film authors and recipients of prestigious awards at the world film festivals. The following films from Europe, the cradle of auteur film, have been selected for this programme: the posthumous film by Alain Resnais, the new 3D film by Luca Godard, the Cannes Golden Palm Award‑winning Winter Sleep by the Turkish director Nuri Bilge Ceylan, the Cannes Grand Prix‑winning The Wonders by the Italian director Alice Rohrwacher, as well as films by authors like the brothers Dardenne, Abderrahmane Sissako, Roy Andersson, Abel Ferrara, Fatih Akin, Ken Loach, Michael Winterbottom and John Boorman. The new American film is represented by the independent directors Richard Linklater and David Gordon Green, while the Canadian cinematography is represented by David Cronenberg and this year's winner of the Cannes Jury Award, Xavier Dolan.

The festival in Busan with its headquarters in the Busan Film Centre, built in 2011, and taking place in 33 cinemas at 7 different locations, also boasts an extraordinary number of viewers: more than 200.000 people. At the same time the biggest Asian Film Market also takes place.

The international premiere of Inferno in Busan, sponsored by the European Film Promotion, European organisation for the promotion of European film, will be attended by the writer and director Vinko Möderndorfer, actor Marko Mandić, and producer Eva Rohrman.

The European premiere of Inferno has already been scheduled for the 36th International Festival in Montpellier, France.

The film was produced by Forum Ljubljana and co‑produced by the Croatian Kinorama, Macedonian Sektor Film, Serbian Delirium, and RTV Slovenia. It was co‑financed by the Slovenian Film Centre, Croatian Audiovidual Centre, Macedonian Film Agency, Film Center Serbia, and MEDIA programme. Filmed with the assistance of the Viba Film Studio. 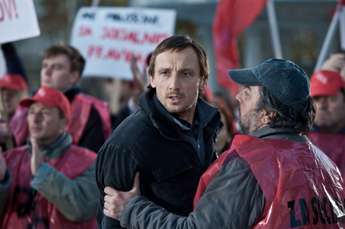