On Friday the award ceremony took place at the 16th Film by the Sea film festival in the Netherlands. The award of the young viewers jury went to the Slovenian film The Tree, directed by Sonja Prosenc.

In its substantiation, the jury consisting of 25 members from the Netherlands and Belgium, aged between 16 and 23, wrote that it especially enjoyed those moments in the film that left room for interpretation. The jury praised the non‑chronological narration and the very experimental camera. They described the film as "a film for open‑minded film enthusiasts who are not afraid to think".

The viewers could enjoy the film at four screenings, and the jury assessed ten films, among them Jack by the director Edward Berger and Under the Skin with Scarlett Johansson and directed by Jonathan Glazer. First three finalists were selected, and in the end the award went to the Slovenian film The Tree.   At the Festival of Slovenian film, which has concluded recently, The Tree received four awards, among them also the Film Critics' Award for Best Film. The Young Jury Award at the festival in Netherlands is its first international award.

At the same time (between 12 and 21 September), the 11th Jameson CineFest International Film Festival took place in Miskolc, the third largest city of our neighbouring state. Class Enemy, the film directed by Rok Biček and produced by Triglav Film, had qualified for the competition programme of twenty films from all over the world. At its Hungarian premiere the film received the Emeric Pressburger Award, the main award of this festival given by the international festival jury consisting of nine members, which also brought it 5000 euros. Besides the main award, Class Enemy also received the FICC Award of the international cinema club federation, given by a three‑member jury.

The main festival award has been named after the Hungarian‑British screenwriter, director and producer Emeric Pressburger (1902 – 1988), born as Imre József Pressburger in this very city: Miskolc at the north‑east of Hungary. On Saturday Rok Biček attended the award ceremony. 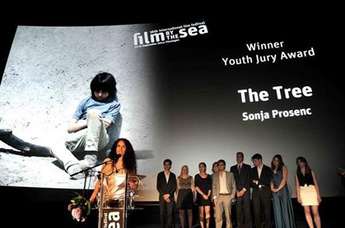