Awards for Vojnović and Biček in September, new festivals for Sonja Prosenc

Between 10 and 16 September the 30th Alexandria International Film Festival for Mediterranean Countries took place. Goran Vojnović received the Award for Best Direction in the international competition for his film Chefurs Raus.

124 films of various lengths and genres from more than 27 countries were shown at this festival. Chefurs Raus was produced by Arsmedia. Three days earlier the film Class Enemy by the director Rok Biček, produced by Triglav Film, received two awards at the 7th Leskovac International Festival of Film Directing in Serbia. The festival took place from 9 to 13 September. The actor Igor Samobor received the Golden Hazelnut Award for Best Male Actor for his role as Professor Robert Zupan, while the director Rok Biček received the Third Živojin Žika Pavlović Award for Direction.

The Živojin Žika Pavlović Grand Prix went to Ivan Ikić for his direction of the co‑production film Barbarians, which had also received the Award for Best Coproduction at the Festival of Slovenian Film in Portorož.

All three awards for direction (Grand Prix, Second and Third Award) at the Leskovac festival have been named after Živojin (Žika) Pavlović, who has also left an important mark as an author in the Slovenian film history.

The Tree, the film by the director Sonja Prosenc, produced by Monoo, which had its world premiere at the Karlovy Vary Film Festival and received three awards at the festival in Portorož, is heading for a busy autumn festival tour. This days it can be seen at the 16th Film by the Sea festival taking place in Vlissingen at the south‑west of the Netherlands. It will be assessed by a jury of young viewers.

The festival took place between 12 and 21 September. On 23 September the Ars Independent film festival began in Katowice, Poland, and lasted until 28 September.  The Tree had qualified for the competition programme of seven films, which may only be debuts or second films.

On 24 September the 22nd Raindance Film Festival started in London and lasted until 5 October. Here Chefurs Raus as well as the documentary film Project Cancer by the director Damjan Kozole had their British premieres. Vojnović's film was screened on 28 and 29 September, while Kozole's film dedication to the performer Ulay was shown on 25 and 26 September. 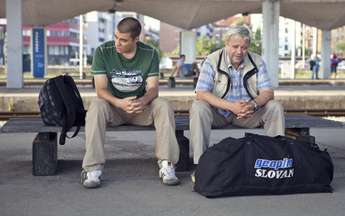