Boles Qualifies among the Five Nominees for the Cartoon d'Or Award

The Animated film Boles by the director Špela Čadež has qualified among the five nominees for the pan European short animated film award Cartoon d'Or 2014!

Thus the 12‑minute Boles, created in the Slovenian‑German co‑production, keeps receiving new awards and nominations. Boles has already been successful at many festivals: among others it received the award given by the short film jury at the Festival of Slovenian Film, in December it was selected as the best film by the audience of Animateka, while on January it also received an award at the Trieste Film Festival.  The film based on the story by Maksim Gorki focuses on Filip, who keeps dreaming about better life as a famous writer. One day the prostitute Tereza asks him to write a letter to her lover Boles, and two weeks later also a love letter from Boles to her. Filip discovers that Boles does not exist and he denies Tereza's request.

Cartoon d'Or is the only exclusively European animation award. It was created in 1991 with the aim of promoting talented European makers of animated film.

The 25th Cartoon Forum will take place between 23rd and 26th September in the French city of Toulouse. The Cartoon Forum is a unique event for the experts in the field of animated film, where the producers and directors can present their animation projects (for television and new media platforms) with the intention of finding co‑producers, broadcasters and investors.

The Cartoon d'Or Award ceremony will take place on 25 September, when all five nominated shorts are to be screened in front of 850 animation experts from all around Europe. 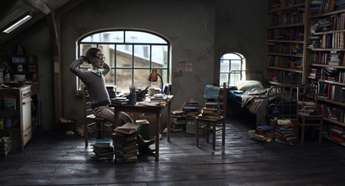