The short puppet animation film by Kolja Saksida Koyaa – Flower, produced by ZVVIKS from Ljubljana, is a successful guest of the international film festivals.

The short puppet animation film Koyaa – Flower by the director Kolja Saksida was realised towards the end of last year in the production of ZVVIKS from Ljubljana, besides the classic also in the stereoscopic technique, allowing for 3D screening, and it is the first such film in Slovenia.

The film, which more than 30 filmmakers from Slovenia and abroad worked on, took more than one year to finish, also in cooperation with the Croatian co‑producer and the financial support of the Croatian Audiovisual Centre. The majority of financial resources for its realisation was provided by the Slovenian Film Centre on the basis of a public tender, and Viba Film studio provided the facilities and technical capacities.

In this week the film Koyaa – Flower will be shown at the Cannes Film Festival, in the context of the Short Film Corner programme, as well as at the Bulgarian animation film festival Golden Kuker. In the beginning of June it will be shown in the competition programme of children's film at one of the oldest animation festivals, Animafest in Zagreb, while in July it will be screened in the competition section of the Giffoni festival, the biggest European children's film festival.

The short animated film shows an unusual story of the protagonist Koyaa and his plant, which grows into a carnivorous monster under the influence of music. As a pilot for an animated TV series this film was also shown at the biggest Czech animated film festival Anifilm in Třeboň, where it was selected as a winner in the international competition of animated projects by the representatives of the Central European national television stations.

Koyaa – Flower is currently shown as a short film before the main feature in the regular cinematographic distribution in the Ljubljana Kinodvor theatre. 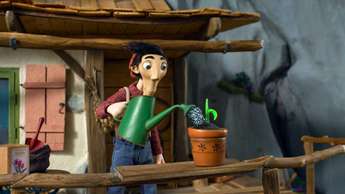