A Trip is the Slovenian Oscar's candidate

The feature debut A Trip by the director and screenwriter Nejc Gazvoda, produced by

This time the films shown in the national cinemas last year according to the rules of the American Academy applied for the selection for the Academy Award for Best Foreign Language Film.

Apart from the film A Trip the following films have also qualified: The State of Shock by the director Andrej Košak, Good Night, Missy by the director Metod Pevec, Archeo by the director Jan Cvitkovič, Bread and Circuses by the director Klemen Dvornik, Tractor, Love and Rock’n’Roll by the director Branko Djurić,The Long Vacation by Damjan Kozole, The Alexandrians by Metod Pevec and The Sphinx by Vojko Anzeljc.
The candidate was selected by the expert commission of the Association of Slovenian Filmmakers, consisting of: Dunja Klemenc (producer), Ingrid Kovač Brus (publicist), Igor Samobor (actor), Martin Turk (director), Ven Jemeršič (director of photography), Branislav Srdić (producer), Miran Zupanič (director).
In 2011 The Trip had its global premiere in the competition programme of the Sarajevo Film Festival.
At the 14th Festival of Slovenian Film it received five (5) Vesna Awards: for best script, best actress and actor, music and editing. The jury of Slovenian critics and publicists pronounced it as the best film, and it also received the special award of the STOP magazine for acting achievements.

The director Nejc Gazvoda qualified among ten European film directors, selected each year by Variety, the American film magazine responsible for the programme section of the Karlovy Vary film festival.

At the film festival in Motovun the film qualified among three finalists for the Bauer Award, given to the best film from the region. In the last two years it qualified for more than 25 festivals and its tour of the festivals has not yet come to an end.

The Trip was co‑financed by the Slovenian Film Centre, and its global sales are handled by Insomnia World Sales from Paris.

The American Academy of Motion Picture Arts and Sciences has been granting The Oscars since 1929. The Oscar is one of the most prestigious awards in the field of film arts. The Academy
makes it possible for the national expert associations in the field of film in those countries whose official language is not English to present their national suggestions for the nominations in the Academy Award for Best Foreign Language Film category.
According to the decision of the Academy, the Slovenian selection is handled by the Association of Slovenian Filmmakers. 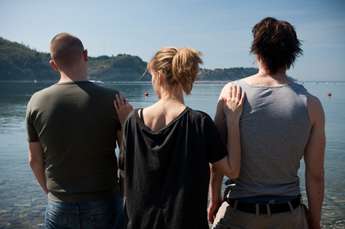