From 16 to 27 May the 65th International Film Festival is taking place in Cannes. Besides this festival the film market, where the Slovenian Film Centre is to represent Slovenia for the ninth year in a row, is also taking place for the 53rd year.

This year the Slovenian cinematography will be presented for the third time in the International Village in the South East European Pavilion together with film institutions and filmmakers from Bulgaria, Bosnia and Herzegovina, Montenegro, Cyprus, Croatia, Macedonia, Serbia and Slovenia.
The Slovenian part of the new pavilion will once again be the meeting point for all Slovenian filmmakers, coming to Cannes to present their already completed projects, seeking partners for their projects in development, and establishing all kinds of business contacts in the field of film.

After a few years a Slovenian producer is once again joining the European Film Promotion project entitled Producers on the Move in Cannes. Aleš Pavlin from the Perfo production house is the fourth Slovenian producer to meet colleagues and other important filmmakers in Cannes between 19 and 22 May, by joining the group of 25 promising and dynamic producers from the whole of Europe and presenting his work to date as well as his new project. Aleš Pavlin was able to become a "producer on the move" because A Trip, the first feature he produced, saw a great reception at important international film festivals. The Slovenian Film Centre, like the Film Fund before it since 2005, is a member of the European Film Promotion, the only European film promotion organisation.

Scripteast is a screenplay development workshop for writers from the central and eastern Europe, presenting the selected screenwriters and projects first in Berlin and then also in Cannes, where the best project will be chosen and rewarded. This year the Slovenian project Echo by the screenwriter and director Blaž Kutin and co writer Rolanda Rebrek has also qualified among the twelve projects taking part in this workshop.

Short Film Corner is a professional short film platform where the authors have the possibility of presenting their films to the widest possible global audience, interested in the world shorts and their makers. This year Slovenia will be represented by a young independent group Film Factory Film Society from Maribor, which will present two of its newest shorts. The driving force of this society consists of Mitja Mlakar, Mojca Pernat, Robert Ribič and Miha Šubic.

On Thursday, 17 May, the fantastic Grossman Film and Wine Festival from Ljutomer will be presented in the pavilion, marking the Slovenian day. 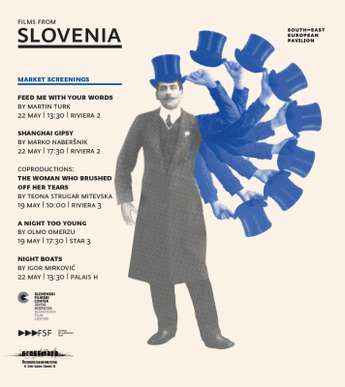