A Successful Berlinale For Slovenian Films

At this year's Berlin Festival the Slovenian co‑production film Parade by the director Srdjan Dragojević received as many as three awards: the Audience Award in the Panorama Section, the Elsa Award, and the Special Mention of the Ecumenical Jury.

The Panorama Audience Award has been given since 1999. This year more than 23,500 viewers voted for the best live action and documentary films. 53 films were presented in this year's Panorama Programme: 33 features and 20 documentaries from 37 countries competed for the Audience Award.

The jury of the Elsa Award, selecting the best feature live action film with a gay and lesbian topic out of all the programme sections of the Berlin Festival, is made up of the readers of the Berlin gay and lesbian magazine "Siegessäule". On 17 February Srdjan Dragojević also received the Victory Column Award in the context of the Teddy Awards.

Excerpt from the award commentary:
" Of all films of this year’s Berlinale edition Parada stood out through its uniqueness.  By means of using humor, one of the strongest and most transgressive agents that cinema has to offer, it conjoins not only homosexuals and homophobes on screen, but unites an entire audience. Its theatrical release in Serbia exemplified that Parada – like no other film – has the power to convey the message that we all are human and need love, no matter how or who we love, to anyone, whether old or young, queer or straight. "
The film Parade also received a special acknowledgement of the Ecumenical Jury, which gives the awards for the best films from the competition programme, Panorama, and Forum.

Parade is currently being screened in the Slovenian cinemas, where the number of viewers is already approaching 25,000. In the neighbouring Croatia it has been seen by 120,000 viewers to date, while in Serbia it has already exceeded 300,000 viewers.The Slovenian co producer of the film is Forum Ljubljana.

The Czech Slovenian co production film A Night Too Young (Příliš mladá noc), directed by Olmo Omerzu and co produced by Arsmedia, was accepted well by the critics and audience at the recent Berlinale Film Festival. Furthermore, A Night Too Young has also qualified for a special programme of around a dozen films selected from all the festival programmes which are then screened in the Berlin cinemas. We will also be able to see it in the Slovenian cinemas.

A pleasant story by a talented young director, wrote the Hollywood Reporter, while the Berlin Kino File stated that the strong presentation of a universal human topic in the superb debut by Olmo Omerzu is reminiscent of the masterpieces by the Polish director Krzysztof Kieslowski, and that the film makes you think about it long after you have left the cinema.

Exberliner wrote that A Night To Young is a fine exploration of the negative influence that the irresponsible actions of adults have on the young, and that the film makes one think.

The first responses to the films, presented at the market screenings, are also known. The film Bread and Circuses by Klemen Dvornik has already been invited for a film festival in South Korea, taking place in Seoul in August. So the Koreans were the first to grow fond of the humour of Dvornik's film.
Bread and Circuses will be shown in the Slovenian cinemas since 23 February. 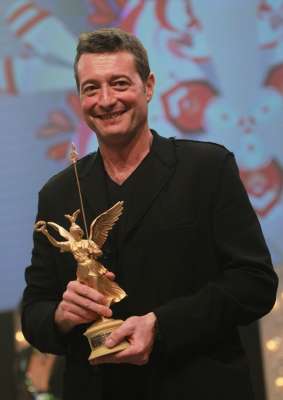