Spotlight on Slovenian Cinema in Macedonia

On Thursday, 10 November, the solemn opening of the 10th Cinedays International Festival with the subtitle Festival of European Films is to take place in Skopje. At the eve of the festival the opening of a retrospective of Slovenian films from the last twenty years will take place in the theatre of the Macedonian Cinematheque, one of the five festival venues.

In the Macedonia and Europe programme, The State of Shock will also be screened at the Cinedays festival.

At the festival programme of gala premieres the minority co‑production Circus Columbia by Danis Tanović will also be shown among 16 films. This programme includes the most recent European "hits" by authors like Nanni Moretti, Lars von Trier and Aki Kaurismaki.

Eight films were included in the "sine Balcan" programme, among them the Slovenian film Dad by Vlado Škafar. The film will compete in the category for the best Balkans film.

In the main competition programme the viewers will be able to see 12 films, among them also A Trip by the director Nejc Gazvoda, which are to compete for the main festival Awards for Best Film, Best Director and Best Script.

The festival also features a special programme of music documentaries, which is also going to include a Slovenian film: here Kuzle, a documentary about the legendary punk band from Idrija by Matjaž Mrak and Robert Šabec, is going to be shown.

Since it is featured in almost all festival programmes and due to the special retrospective of its films, this year Slovenia is one of the two "in‑focus" countries. The festival is also going to pay special attention to Georgia.

After the comprehensive retrospective in Los Angeles, which took place in the Billy Wilder cinema in September, this is the second retrospective of Slovenian film abroad this year. 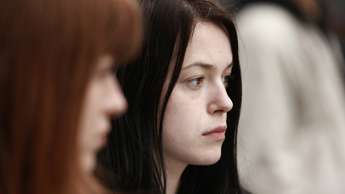