The Death of Vinko Filač, Director of Photography

Vinko Filač, Director of Photography, passed away. He also cooperated with Emir Kusturica, among others, and during his final years he mostly worked abroad.

Vinko Filač was born on 14 February 1950 in Ptuj. He graduated from the Prague Film Academy with the generation of Tine Perko, Goran Paskaljević, Goran Marković and Emir Kusturica. His view of the world enchanted many viewers in Slovenia and all around the world. He also worked with Franci Slak on the making of Bumpstone, France Štiglic on The Merry Wedding and My Uncles Told Me, and with Karpo Godina on the film Red Boogie.
He is most famous as the director of photography of all the most successful films by Kusturica, from his Venice Award-winning debut Do You Remember Dolly Bell? to the Cannes Festival winner When Father Was Away on Business, the films Time of the Gypsies, Arizona Dream and then the second Cannes winner ¬- the 1995 film Underground.
During the last fifteen years Filač mostly worked abroad, where actors like Marlon Brando, Johnny Depp, Jeremy Irons, Gong Li and Juliette Binoche lined up in front of his camera.
With his photography he enthralled the audiences of the film Chinese Box by Wayne Wang, and captivated the Berlin Jury in 2003 with the short Slovenian film (A)torsion, directed by Stefan Arsenijević, which received the Golden Bear. He received multiple awards as the director of photography, at home the "Metod Badjura" Award as soon as in 1985, in Pula the Arena for the film Bumprock, and several awards abroad, also for Arizona Dream and Underground.
Vinko Filač died at the age of 59. 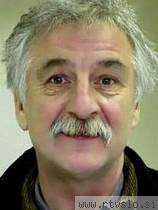