Grand Prix for Wolfy in Montpellier

At the 30th Mediterranean Film Festival in Montpellier (24 October - 2 November), which has just concluded, the expert jury selected the Slovenian film Wolfy by the director Matevž Luzar for the best film out of 21 short films in the competition programme.

Wolfy received the Grand Prix and a monetary award in the amount of EUR 4000. Luzar's diploma film continues its successful presentation around the world and at home, where the leading actor Evgen Car received the Award for Best Actor at the 11th Festival of Slovenian Film.
The Golden Antigone for Best Feature went to the film The Tour by the Serbian director Goran Marković. The film received several monetary awards (for distrubution, subtitling, etc.), thus "earning" more than EUR 50 000 in Montpellier. It is officially a Serbian Bosnian co production; however, the Slovenian producer Aatalanta also took part in it. 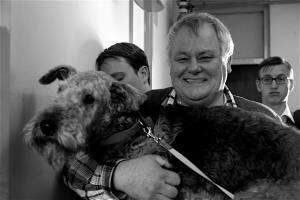