On Friday, 10 October, the 24th International Film Festival started in Warsaw, and it lasted until 19 October. The Variety magazine placed this festival among the twenty leading European film festivals, as the only one of the Polish film events.

In the recent years, Slovenian films were regular guests of this festival. This year they qualified for most of its sections, thus reaping a record harvest.
This year's festival included various competition and non competition programmes, screening 153 feature films and 87 short films from 55 countries. For all the selected films the screening at this festival represented the Polish premiere.

After a successful presentation in Venice, Vinko Möderndorfer's film Landscape No. 2 was shown in the competition programme for the first and second films. 16 films from the whole world, from the Philippines to Hungary and Sweden, competed for the award in this section. At the invitation of the organisers, the director also attended the Polish premiere.
The film Landscape No. 2 is going to have its Slovenian premiere on 22 October at the opening of the Festival of Slovenian Film in Portorož, while on 23 October the regular distribution all over Slovenia is to take place.

13 films were presented in the documentary films competition section, of which 6 came from the United States. Slovenia was represented by Dar Fur - War for Water by Tomo Križnar and Maja Weiss, which had already been successfully presented at the festival in Durban (South Africa).

The film I Know by Jan Cvitkovič, which had its premiere at the Locarno festival and has recently also been shown in the Kinodvor cinema, was shown in the short films competition programme.

In the New Films, New Directors programme, Rooster's Breakfast by Marko Naberšnik and L... Like Love by Janja Glogovac were screened among twelve films. Before Warsaw, the former had been screened in Pécs, Hungary, while the latter had been shown in London. The selectors chose 18 films for the Discoveries programme, among them also Tractor, Love and Rock'n'Roll by Branko Djurić, which had previously been shown in Hamburg.

Two co productions qualified among fourteen films in the competition programme, named after the Polish capital and the city of the festival: Love and Other Crimes by Stefan Arsenijević and The World is Big and Salvation Lurks Around the Corner by Stephan Komanderev. 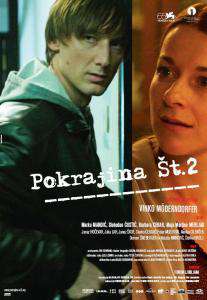