The World Premiere of the film Landscape no.2 in Venice

The feature film "Landscape No.2" by the director and writer Vinko Möderndorfer is going to have its world premiere at the 65th Venice Film Festival in the Giornate degli Autori / Venice Days programme. The film was produced by the Forum Ljubljana institute and co produced by the Serbian Delirium Films, RTV Slovenia and VPK. It was co financed by the Slovenian Film Fund and Film Centre Serbia.

From the festival materials:

"Only eleven films from eleven countries have qualified for the Giornate degli Autori / Venice Days programme. Besides the Slovenian film Landscape No.2 films from Italy, France, Belgium, United Kingdom, Finland, Romania, Poland, the Czech Republic, Argentina and Sri Lanka have qualified - and altogether this programme will include 9 world premieres.
Eleven distinct declinations of arthouse cinema. Eleven answers to the questions with which we have been obsessed for the past five years. Is there still room for a different kind of cinema? What margins remain for those who work outside the market dynamics? How to reconcile the sacred need to communicate with audiences without surrendering to the homologation of tastes and language?
Since 2004, Giornate degli Autori / Venice Days - modelled after the independent spirit of the Directors' Fortnight at Cannes, and directed for the third consecutive year by Fabio Ferzetti - has been searching throughout the world for the most resounding answers to these and other questions. Yet needless to day, every year it makes history in its own right.
There are four films from Central-Eastern Europe, which is no coincidence given the recurring themes of this year's films. Whereas in 2007 the films centered on war, conflict, and nomadism, in 2008 emotions, inner conflicts and fear of betrayal prevail. Betrayal that can come from without as well as, and what is worse, from within. Or even from the past, as in the Slovenian title Landscape No. 2, which tackles the subject of the mistakes of fathers passed on to their children.
We are proud to point out the distinctly Eurocentric profile of this year's selection. We have not had this many good films from Europe at the same time for some time. This is a good sign: behind these stories of flight, growth and transformation lie the anxieties of an increasingly dissatisfied and problematic continent. Perhaps today the decisive elements of cinema rest not so much in visual style as in narrative strategies. This is cinema that takes risks and experiments less with the visible and more with what is not said - the gray zones, the less recognizable and controllable part of our lives.
These are just some of the intertwining threads of this year's selection. The main task that we set for ourselves consists of presenting and discussing works that reflect the state of cinema in the world today. The task is highly ambitious: the sole aim of the criteria governing our selection is to offer a reliable panorama of independent, experimental and uneasy films dedicated to exploring the exemplary events and dramatic conditions of a multiform contemporaneity."

ABOUT THE FILM
The burglars Sergej and Polde steal a valuable painting "Landscape No. 2". By coincidence Sergej also takes a mysterious document dating back to the end of the World War II. Instructor (Slobodan Ćustić) is ordered to recover the stolen painting and the document, which triggers a diabolic mechanism of the past.
"The script builds on the realisation that any unresolved past, personal or national, leaves its mark and keeps coming back. Its returning is still a burden for the generations which have nothing to do with it," the director and writer Vinko Möderndorfer said about the film.

The Slovenian premiere is going to take place at the Festival of Slovenian Film in October, after which it will also be screened in the Slovenian cinemas. 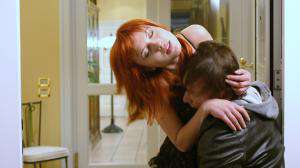