Between 6 and 16 August, already the 61st International Film Festival is taking place in Locarno. 2500 films attempted to qualify for the short film competition programme, entitled Leopards of the Future, but only 23 were finally selected - among them Vučko by the director Matevž Luzar, which had also been nominated for the Student Academy Awards.

Only directors who have not yet shot a full-length film may compete for the awards in this section.

This year, the programme of short films by the already recognised directors is going to be presented for the first time in Locarno. 6 films have been selected for this programme, entitled The Authors' Short Films, including the 7-minute I Know – the latest film by Jan Cvitkovič, filmed with the aid of the Hungarian co‑producer, which will have its world premiere at this festival. Cvitkovič's film will be shown in the company of such directors as Ildiko Enyedi, the Hungarian director who received the Golden Camera in Cannes in 1989, Adina Pintilie from Romania, Laila Pakalnina – the Latvian director whose film The Hostage from 2006 is also a Slovenian co‑production, Gabriele Mainetti from Italy and Peter Volkart from Switzerland. 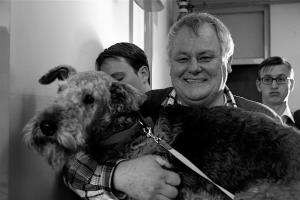