From 16 to 22 July, the Walter Reade Theater in New Yorku will be the venue of a retrospective overview of Slovenian cinema, named At the Crossroads: Slovenian Cinema by the programme selector, Richard Peña.

The first retrospective of Slovenian cinema took place in 2003 (7 to 12 May) at the BAMcinématek in New York; however, only the contemporary Slovenian films were shown: Idle Running by Janez Burger (1999), Bread and Milk by Jan Cvitkovič (2001), Sweet Dreams by Sašo Podgoršek (2001), Ode to the Poet by Martin Srebotnjak, Rustling Landscapes by Janez Lapajne (2002), Ljubljana by Igor Šterk (2002), the documentary Fortress Europe by Želimir Žilnik (2001) and the short film (A)torsion by Štefan Arsenijević (2003).

Richard Peña's selection from the opulent treasury of Slovenian film history includes: Vesna by František Čap (1953), Dance in the Rain by Boštjan Hladnik (1961), The Valley of Peace by France Štiglic (1956), Paper Planes by Matjaž Klopčič (1967), and The Raft of Medusa by Karpo Godina (1980).

The retrospective is supported by the Slovenian Film Fund and the Consulate General of the Republic of Slovenia and organised with the invaluable cooperation of the Lincoln Film Society.

In the booklet published for the event, Richard Peña wrote:

“At a time in which most discussions of international cinema focus on the negative impact of globalization, Slovenia has become an uplifting and inspiring success story for the cinemas of other small nations.” 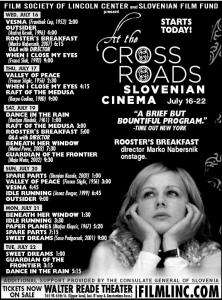